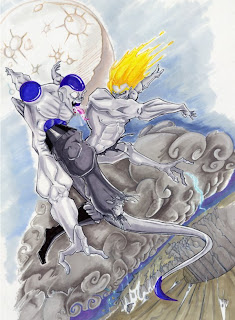 Now that the image is with its righteous masters I can show it.

A snapshot of the fight between Son Gokuh, the Monkey king, and Freeza, the cold hearted posh kid of a cosmic mafia boss. Albeit quite a plain character, I have always found Gokuh extremely fascinating. As a typical super hero he uses his stregth to defend the inocents. However, that is not the main reason why he fights against villains. The main reason is just to test the limits of his own strength...no matter what consequences his powers can bring upon the defended... such as the destruction of cities or even planets. So, isn´t he a bit of a bastard?
Publicado por Inkfected en 12:56